Here’s your chance to buy one of the rarest and most beautiful side-by-side shotguns ever made. 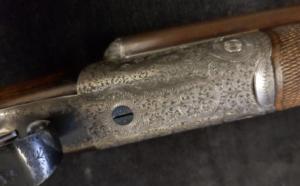 John Dickson & Son has been building Round Action shotguns since the 1880s. Since then, they’ve made approximately 2,000 of these SxSs. Of these, I believe fewer than a dozen of these have been sixteen gauges.

Besides being a rare gauge, the one you see here is special for couple other reasons, to: First, the engraving. It’s an unusual pattern, probably executed by Harry Kell. Second, the damascus barrels. According to the seller, this gun was made in 1905. That’s late for damascus barrels, so whoever ordered this gun specified that he want them instead of fluid-steel.

Fron this killer 20g Piotti to a hard-to-find Beretta ASEL OU and lightweight Alexander Henry boxlock SxS. See all these great doubles and more now.
From this great looking 12g Lebeau Courally and a Hollis double to a couple of nice 28-gauges and a 16g Francotte that looks like the perfect SxS for grouse. See all of this week's doubles now.
From this fantastic-looking Fabbri OU to a hard-to-find 20g Winchester M21 with double triggers and a rare 12g Parker on a 1/2 frame. See all of this week's doubles now.
Contact

Learn what it's worth
0 shares