Gun Runner Online Auctions has a few nice double barrel shotguns in their January auction. You can bid on these auctions now. They end on 1/14 & 1/15.

I’ve never dealt with Gunrunner, but they seem pretty legit. But be aware that all sales are final. So ask lots of questions before you bid. 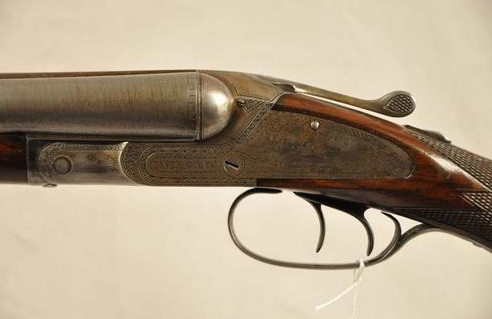 See all shotguns in this auction

Value is an interesting concept, especially when it comes to double barrel shotguns. Why one gun is more valuable than another is sometimes hard to figure out. Here’s an an example of what I mean.

This Parker DHE side by side is online right now at Gunbroker.com:

This other Parker DHE double barrel shotgun is at Auctionarms.com:

Boths guns are pretty similiar: 12 gauge DHEs with single triggers. They’re both two barrel sets, and they’re both in excellent original condition. They even have similiar stock dimensions. So why is it that one is going to bring so much more than the other?

Their are only two big differences that I can see:

1. The DHE on Gunbroker letters as original. Of course, this is a big deal. Provable original condition is the gold-standard on old shotguns.

2. The online auction companies. Maybe Auctionarms doesn’t have the traffic that Gunbroker sees.

This 8-gauge L.C. Smith side-by-side, double barrel shotgun is on Gunbroker right now. The seller says it has 32″ barrels. From the pics, it looks like it might be a No. 1 grade.

Of all the major American makers, Parker made the most 8 gauges – hammerless and hammerguns- and Lefever made the fewest. Baker made a few, and Colt made at least one. A.H. Fox never made any.

Eight gauges used to be very popular for wildfowl. They pushed a ton of lead and this made them ideal for swatting flocks of birds at a time – just what a market hunter on the Chesapeake Bay wanted to do. Eight-gauge shotguns were outlawed for use on waterfowl in the US in the early 20th century.

BTW: if you have an 8 gauge double, or you know of any out there, please let me know. I’m interested in purchasing one and will pay a finder’s fee for a nice one.

Nadeau’s Auctions in Windsor, CT, has two Parker DHE double barrel shotguns coming up on Saturday at its January 1st sale. The guns are both 12 gauges. Here’s the info on them from the auctioneers:

There are a bunch of  decent, D-grade Parker double barrel shotguns on Gunbroker right now.

The first one is this 10 gauge D-grade hammergun. To my eye, the gun looks cleaned up a bit. The action looks too silver to be all original. A few of the screws are buggered, so it has been monkeyed with a bit. The finish on the barrels is odd, too. The seller is offering a 3-day inspection and this is definitely a gun I would want a certified Parker expert to go over before I closed the deal.  It’s a rare gun, though.

There’s also this nice DHE 12 gauge on a #1 frame. This gun looks all original and it has it’s original butt plate. The gun weighs 7lbs, so it would be a nice shooter. I bet it won’t hit its reserve, though.

Here’s another 12 gauge DHE like the one above. It’s another nice side-by-side shotgun. This one has been on Gunbroker for a while, though, and it’s getting stale. I doubt it will sell.

Finally, there’s this 12g DHE two barrel set. The seller is calling it “Unique and Important.” I don’t know about that, but it is neat. It has two sets of damascus barrels–26″ and 30″. It also has sling swivels and a bunch of spare parts in their original paper envelope from Parker. According to the seller, everything on the gun letters as original. The finish on everything sure looks good. That canvas case is probably original, too. Pretty cool.

Horst Auctions in Ephrata, PA, is holding a big gun auction on Saturday, 11/6.

Here is a listing plus pics of everything in the auction. There are plenty of good guns there. Lots featuring double barrel shotguns are listed below:

Some nice double barrel shotguns coming to auction. Check them out:

Lots of good guns, including a couple 12g Fox A grades, several  L.C. Smiths (including a Trap grade) and a handful of Parker, including a GH with an original strengthing rod in the buttstock.

Several nice guns, including this and this Francotte double barrel and this 12 gauge Parker DHE shotgun. The Parker may be an original Skeet Gun. Lots of Winchesters, too. You can see all the firearms here.

Guys call me all the time about shotguns.

Most of the side-by-sides they mention are every day doubles — Nitro Specials, Sterlingworths, no-name Euro shotguns from WW2. The callers are nice folks; I’m happy to help them out. They ask questions, I throw out values and usually say no thanks when buying is mentioned.

But every now and then something nice pops up and makes it all worthwhile.

Last March a gentleman from Maryland called me about a double barrel. In less than twelve weeks, this shotgun would change hand three times and almost double in price.

“YOU   THE   FELLA   INTERESTED   IN   L.C.   SMITHs?” he hollered at me over the phone. He spoke slowly, with an accent that sounded just south of the Mason Dixon line.

He gave me the run down.  “What kind of stock?” I asked, scrambling to find a pen and paper for notes.

I looked harder for a pen and paper.

“What about condition?” I said, expecting bad news.

They made just 404 twenties in No. 2 grade. Probably fewer than 10% had straight grips, or 40-50 guns. And this caller had one that was almost new, meaning it could be the finest in existence.

“Let me get this straight,” I said, slowing down the conversation to gather my thoughts. “Your Smith is a 20g No. 2 grade, two triggers, ejectors, 28″ bbls, a splinter forend, straight grip, 14 1/4″ to a buttplate, and just about all its original condition. Is that right?”

“Yes sir. And it’s in its original case.”

“So what are you looking to get for it?”

“It’s a lot of gun,” he stated without hesitation. He was right – if the gun really was in near-new condition.

“Well, how about you send me some photos and we’ll see what we can do.”

Nice guns have always been expensive. Even though Hunter Arms considered No. 2s to be lower- to middle-grade shotguns “…just right for rough usage…” they still cost a lot of money.

After several weeks of waiting, pictures of the 20g L.C. arrived. They weren’t the best, but the gun looked right. The only problem: I still hadn’t found $7,500. In the end, I had to pass on the gun.

But instead of letting it get away, I forwarded the pics to a friend. A few weeks later he brought the gun home with him in the trunk of his car. The final price: $7,200.

My friend is a crazy for vintage American guns. When he saw this LC Smith he had to have it. “You just don’t walk away from condition like that,” he told me afterwards as we rehashed the deal.

But even though this LC was almost new, my friend soon traded it to a dealer. A week later this dealer had the little Elsie 20g on the open market for $9,995.

My friend and I were both surprised. Ten grand for a LC Smith No. 2 grade? While they’re nice, they’re not that nice – at least not to us. That kind of money lifts you into another league of double barrel shotguns.

But what did we know? Within a few weeks the gun sold to a second dealer. When it appeared on his website, the asking price had jumped – to $12,995!

Thanks to a friend of mine for the color images.